One important aspect of a sound is how loud it is. This is particularly important in music. We aren't just concerned with the overall volume of the music (of course, you will want to listen to music at you preferred volume, which can vary a lot depending on whether you it is background music, or a live gig).

But when creating music we are also very conscious of the relative volumes of the different instruments. This of course is usually part of mixing the final piece.

What do we mean by volume? Well a sound wave transfers energy from the sound source to our ears. The amount of energy transferred per second is called the power delivered by the sound.

The more power in the sound, the louder it is, of course. But the amazing thing about our ears is that they can sense over an astonishing range of power. If you imagine the tiniest whisper we can just about hear, and the loudest sound you can listen too without damaging your ears, then if fact the loud sound is a million times more powerful than the whisper.

We measure sound power (ie volume) in decibels (dB). Here are some examples of different sounds, and their approximate dB values:

It is important to realise that decibels are a logarithmic measure of sound power. Every time the decibel value goes up by 10, the sound power is multiplied by 10.

The reason we use a logarithmic scale is because a difference of 10 dB between two sounds seems like the same amount. For example: 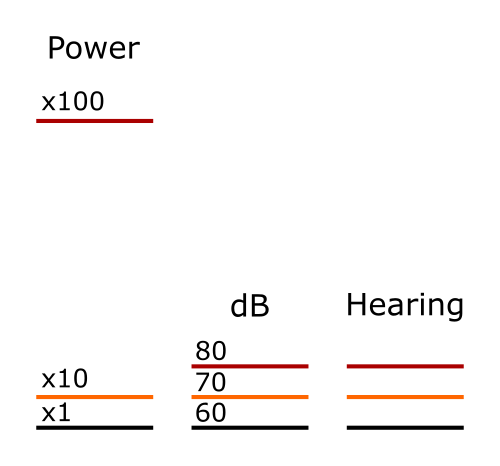 Decibels are actually a relative scale. We can choose to set 0 dB at any level we choose. For example, we might decide that we are going to base our measurements on the volume of one note of a piano played at normal volume. We define that sound as being 0 dB. On that scale:

But what about quieter sounds? Well decibels are logarithmic, so if a dB value is negative, we divide the power by the factor, rather than multiplying it:

In computer music systems, unlike in the physical world, there is an absolute maximum upper limit to the sound power. Sound amplitude is represented as a number with a maximum range, and it is literally impossible to create a sound amplitude that is higher than that. Obviously, the sound created can be fed into an amplifier and played as loud as you like, but within the computer system it has a fixed maximum value.

Some systems define this maximum value as 0 dB. This means that when you set the volume of any instrument in the system, it must always be negative (or at the very most zero). You define the volume of a sound by haow much you are reducing that sound realtive to the loudest it could possibly be.