A network attached storage device (NAS) is a file storage device which is attached to a local area network (LAN) to allow computers on the network to store an share files. 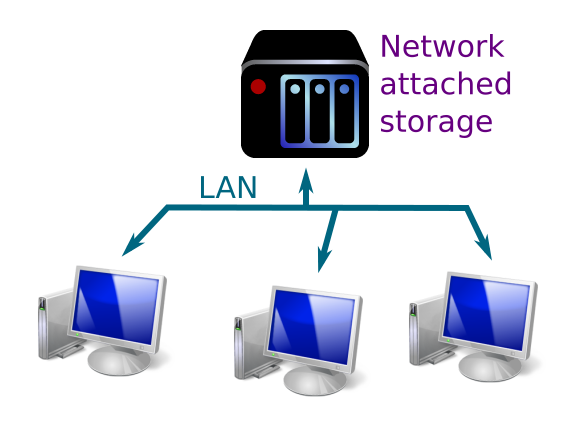 A NAS is a type of simple file server. A NAS is aimed more at a home or small office setup, while a files server is more likely to be used in a bigger office or school. In many cases a NAS:

Some of the more expensive NAS devices have a lot of the features you might expect from a file server, so there is some overlap.

Some broadband modems have basic NAS functionality built it. You can plug is a USB disk, and it will be shared on the network so that it is available for streaming and sharing. This usually offers very basic functionality, and sometimes only works with certain types of drive, but it is the cheapest option. It also consumes very little extra power.

Simple NAS boxes contain a disk, and the hardware necessary to connect to the network. Some boxes also contain space to add extra disk drives. These are relatively cheap, but they can't usually be used for anything other than simple file sharing.

High end NAS boxes are often PC based. There is a lot of overlap with file servers, and it might be possible to install extra software, for example to add print server functionality.

For the home market some people use a board such as a Raspberry Pi, plus a hard disk, as a simple file server. This has fairly low power consumption, but it is very flexible because the Raspberry Pi is running Linux.