Analogue synthesisers represent sound waves as a time varying electrical signal. The voltage of the signal represents the value of the sound wave.

Analogue synthesisers create sound using electronic oscillators and noise sources, which are combined in various ways to create complex sounds. Further effects such as filtering, envelopes, reverb are used to create a huge variety of sounds.

Most simple analogue synthesisers provide controls knobs, sliders and switches that can be used to control the sound that is created:

More sophisticated synths also have patch cables that can be used to connect the different effects together is different ways, to provide an even greater variety of sounds: 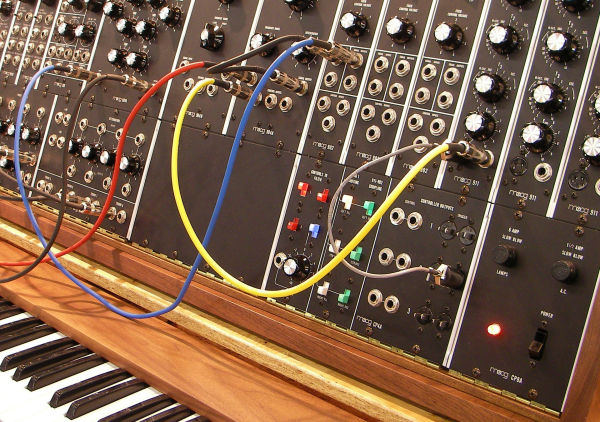 However, you are still limited by the sounds that can be created by the circuits that are available in the synthesiser itself.

Modular synths take this to the next level by allowing a unique synth to be built from individual modules available from different manufacturers, or you can even build them yourself.

Modular synths are usually based on a common specification, for example the Eurorack system is a popular one. You start with an empty case, which normally includes a power supply. There are many different cases available from different manufacturers:

You can then purchase individual modules. A module has a front panel, with the electronics behind it. Here is an example: 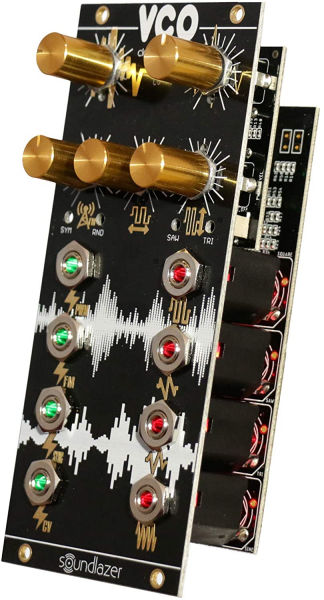 The rack system defines the physical size of the panels, so that all the modules will fit in any case. Eurorack modular synths use a dual power supply (that is, a three power rails, 0V, 12V and -12V). The signal operates between about +/- 10V.

There are a huge variety of modules available, including sequencers, voltage controlled oscillators, envelope generators, filters, echo and reverb units, and many more

The final output signal will be sent to an amplifier and speakers for live output, or to some kind of recording device for stored output. This could an an analogue tape device, but it is more likely to be digitised and processed by a DAW (Digital Audio Workstation) or similar.

There are several advantages to analogue sound, specifically in terms of sound synthesis.

Firstly, analogue synths have imperfections - much like traditional physical instruments. Tuning isn't accurate to six decimal places, waveforms are often slightly distorted, a certain amount of noise is present. Within limits, these imperfections can make the sound more appealing to the ear.

Secondly, analogue synths have a physical interface to play with - actual knobs, switches and patch cables. Many people find this sort of interface more intuitive to experiment with, and find that they can do more with it, even if those same effects are also available from a digital synth.

Finally, you can build your own analogue synth modules, it is great fun, and you end up with something physical that you have created. You can write your own modules for a digital synth too, but some people find that less satisfying.

But there is also a little bit of hype around. Analogue synths are fashionable, and original vintage synths are expensive - because they are rare, not necessarily because of how fantastic they are.

Analogue sound has a few disadvantages. The imperfections mentioned earlier (such as tuning errors, distortion or noise) are only ok in very small amounts. If they become excessive, it can be a problem. Nobody wants to listen to a synth that is totally out of tune, or puts out a background hiss.

Analogue synths can get quite expensive because each module adds extra hardware costs. Compared to an open source software synth, where you use need a PC and possibly a sound card, but after that you can add as many software modules as you like at no additional cost.

There are certain things that are difficult to do in analogue. Complex sequencing and complex envelopes, for example, are better done by a digital computer.

Sometimes a hybrid approach can be best, using analogue modules where it makes sense, but using an Arduino or Raspberry Pi board to handle complex control tasks, managing sampled data, storing the final sound digitally and so on.