If there are too many programs running on a computer, it might run out of RAM. This can cause problems:

What actually happens is that the system will allocate 8GB of space on the hard drive, called swap space. Now suppose the physical RAM is completely full, and a program requests more memory. Here is what happens:

This is all fine until a program tries to access Block A, which has been copied to the swap space. In that case:

This is OK if you occasionally use slightly more memory than the system has available - it means the computer can keep running without any program errors. But if you use a lot of virtual memory, you can end up in a situation where the computer is continuously reading and writing memory to the swap file, and all the programs run at a snail's pace. This is called disk thrashing.

As a summary, here is the hierarchy of different types of memory, from the fastest (registers) to the slowest (virtual memory, on disk): 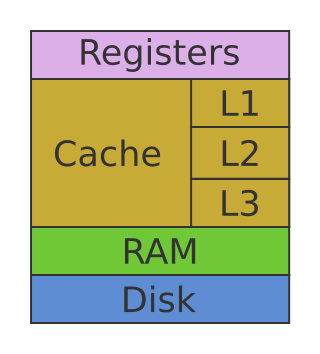